Transportation in Conroe
Plan Your visit

Of all the surrounding areas in towns and the Houston metropolitan area, none has grown as much over the past few years as has Conroe, Texas. Conroe is the county seat of Montgomery County directly to the north of Houston and Harris County. Conroe is a well-developed and established community in Montgomery County. The growth in jobs, homes, recreation, and activities in this area are second to none in the communities surrounding Houston. If you are looking to find a town in Southeast Texas where you and your family can develop deep roots then Conroe should be at the top of your list.

If you are recently coming out of a divorce and looking for a new place to call home then Conroe may be the type of environment that you would like to raise your family. before you book your moving truck and come down to Montgomery County I would like to share some information with you about transportation in this area of the state. Anyone who has spent a considerable amount of time in Texas can tell you that getting around by vehicle is the main way people are transported. With that said, let's spend some time getting familiar with the roads in and around Conroe.

Traveling by car in Conroe

The city of Conroe is almost perfectly split in half by Interstate 45. Interstate 45 is a north in South Interstate that begins near the coast of Texas in Galveston and proceeds up through the southern suburbs of Houston, through the city of Houston, and north of the city through towns and communities like Conroe. If you plan on living in Conroe and working in The Woodlands, spring, or the city of Houston then Interstate 45 is the main way for you to get to and from work. If you are moving to Conroe from an area that does not have major interstates like this then certainly I would consider this factor. 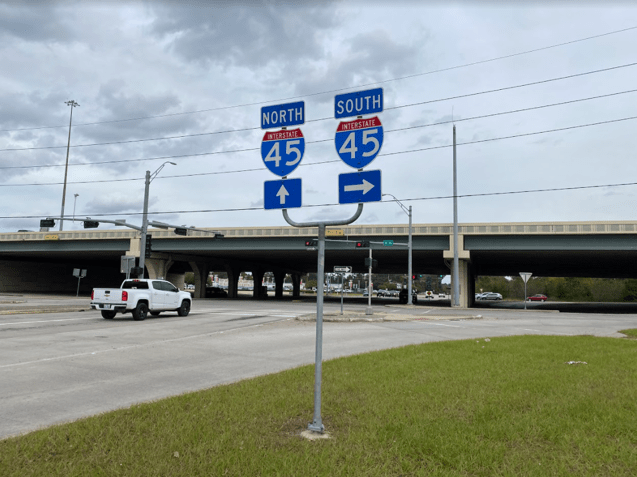 Interstate 45 is a heavily traveled stretch of the road especially in between the city of Houston in Conroe. Although it transports people quite efficiently to and from these major population hubs anyone who is from Houston can tell you that there are alternative routes to utilize when traffic is heavy especially during rush hour events. As such, you should become familiar with the Hardy toll road as well as the grand Parkway when it comes to traveling South of Conroe up to your new home in the Conroe area.

Next, the grand Parkway is a relatively new addition to the transportation scene in the Houston metropolitan area. It is essentially a large loop that encompasses a great deal of area from the South of Houston, moving up through the western suburbs and onto the northern extremes of Harris County just South of Montgomery County and Conroe. Especially if you work or have activities Omni West or southern ends of Houston the grand Parkway can be a great way for you to travel through a large amount of area without having much in the way of traffic to deal with.

Again, the grand Parkway has technically had a toll road and you would need to contact the Harris County toll road authority to obtain hey toll tag to be able to utilize the toll road. However, living north of the city and working within Houston the money and expense associated with the toll tag would almost certainly be worth it in terms of your being able to move about freely in an area that is otherwise congested a great deal of the time. I would recommend you are taking some time to travel within the city before moving here to figure out where you are going to live about your work.

Traveling to the city of Houston for a court appearance

The last subject I wanted to discuss with you in today's blog post is how to best travel to the city of Houston if you have a court date. Of course, if you live in Conroe and have a court date in Montgomery County then the travel to court will be much less significant. You should expect that traveling to downtown Conroe from any place within the city should take less than 10 minutes. This is the convenience of being near the court.

However, it could also be that you have relocated 2 Montgomery County from Harris County and as a result still have a business to attend to in the courts in Houston. If that is the case then I would like to spend some time discussing with you your options when it comes to traveling from your home in Conroe to Houston.

It goes without saying that if you are doing in court at 9:00 a.m. then you will have to leave in plenty of time from Conroe to get to court. Checking the traffic on Interstate 45 in the morning is essential. Utilizing alternative routes in the event of congestion or a motor vehicle accident would be prudent. Do not plan to roll out of bed at 8:00 and make it to court on time. Rather, you are better off leaving early and getting to the courthouse early.

There are many parking lots in and around the courthouse. It helps that the home ballpark of the Houston Astros, Minute Maid Park, is just a few blocks from the courthouse. That means there is a great deal of public parking for you to take advantage of. While most street parking and public parking accept credit cards, you should be prepared to have cash available just in case to park. The Harris County courthouse is located at 201 Caroline Street. Once you make it through security there is a guidebook for you to be able to look at what floor of the courthouse you are courtroom is on and make it to court in plenty of time for your hearing.